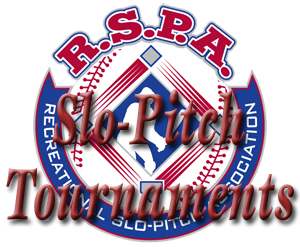 1.
General:
1-1
Play - Rain or shine.
1-2
A Team Representative MUST check in to Headquarters one hour prior to first game.
Check in at Headquarters before each game.
Turn in official score sheet at Headquarters after each game.
Failure to check in before the third game WILL RESULT IN A GAME DEFAULT.
1-3
Home Team determined by coin toss.
Home Team MUST supply and place bases with pegs, including a Safe-Base (applicable SPN rules apply).
If neither team has bases with Safe-Base, a double default will be declared.
If a team does not have bases, there are loaner base sets available. Please arrange ahead of time.
Strike zone mat and balls will be supplied by the tournament.
1-4
Round Robin Format. Only one (1) loss in the elimination rounds.
1-5
Tie Breaking Formula: For two or more teams with the same Win/Loss record:
-a. record against each other;
-b. best plus/minus, all games;
-c. best plus/minus excluding non-tied teams;
-d. least runs allowed, excluding non-tied teams;
-e. draw from hat.
1-6
All rules and/or principals not specifically addressed in the following rules and amendments
will be specified in the current Slo-Pitch National Softball Inc. Rulebook.
SPN 2017 Rule Book

The Game:
2-1
All games will be SEVEN (7) innings. Home team does not bat in the bottom of the 7th inning if ahead.
Four (4) innings required for complete game. (3-1/2 innings if home team is ahead).
Once an inning starts, it must be completed (unless called for reasons of safety).
2-2
TIME LIMIT: One hour and 5 minutes. There is a time limit in the Finals (unless specified otherwise).
2-3
A GRACE PERIOD of ten (10) minutes (umpires time & discretion) will be allowed from the official game start time.
The grace time will be deducted from the game time.
2-4
International Tie Breaker Rule: Will be used in extra innings or after time limit has expired.
2-5
MERCY RULE: Mercy rule will be in effect: 12 runs after five (5) or more complete innings.
2-6
INNING MERCY RULE: Maximum 6 runs per inning mercy rule; (unless more than 6 runs are required to avoid a mercy); last inning is open.
2-7
DEFAULT SCORE: Default score is 7-0 (one run per inning)
2-8
HOME RUN RULE - "Match Plus Two": In effect in all fenced parks.
At no time during a game will the number of over the fence homeruns (untouched) allowed hit by one team, be more than two (2) above the number hit by the opposing team. Any homerun in excess of two (2), and the batter will be declared out.
2-9
BALLS AND STRIKES are called by the Umpire using a mat (with homeplate cut out). Homeplate is NOT a strike.
If no mat is available, balls and strikes will be called by the strike zone as the ball passes over the plate.
THIRD STRIKE FOUL RULE is in effect. The Batter is declared out if he/she hits a foul ball (or foul tip) with two (2) strikes (as per SPN Rules).

The Playing Field:
3-1
Bases will be set at sixty-five (65) feet. Fifty (50) feet to the pitchers plate. (as per SPN Rules)
3-2
COMMITMENT LINE: Twenty (20) feet from home plate. Base runner must continue once one foot is on or over the Commitment Line (and on the ground). (as per SPN Rules)
3-3
SCORING LINE: Scoring Line at home plate must be touched or crossed (a portion of the foot on or over the line and on the ground). Force out at home plate. (as per SPN Rules).
3-4
PITCHING ZONE: 24" wide located 50 to 65 feet from home plate as per SPN rule.
3-5
SPN 175 Foot Rule: (Ontario rule - not in the SPN rulebook) - IS NOT IN EFFECT FOR RSPA TOURNAMENTS.
Outfielders may be positioned anywhere in the OUTFIELD. See also below.

Equipment:
4-1
Home Team MUST supply bases complete with pegs, and including a safe-base.
Home Team must place and peg down bases before scheduled game start time.
If Home Team does not supply and place base in the allocated time, the Visiting Team must supply and place bases complete with pegs, and including a safe-base.
If neither team has bases complete with pegs, and including a safe-base, a DOUBLE DEFAULT will be declared.
If a team does not have bases, there are loaner base sets available. Please arrange ahead of time.
Strike zone mat and balls will be supplied by the tournament.
4-2
No metal spikes are allowed. The player is automatically ejected from the game.
4-3
BATS: As per SPN rules; see list of illegal bats.
Titanium and multi-walled bats are illegal. Hardball bats are illegal. (as per SPN Rules)
RSPA tournaments allow BOTH USSSA and ASA approved bats.

Note: Local leagues have the ability to set their own bat policies.
Note: This rule is NOT in effect for RSPA Coed Slo-Pitch League or tournaments.
SPN Bat Policy -- www.usssa.com
4-4
BALLS: Ball will be supplied by the Tournament Convener.
The official ball is Worth "Hot Dot" (as per SPN Rules)
5.

Conduct:
6-1
CONDUCT: All players and coaches will conduct themselves in a sportsmanlike manner at all times. Any harassment, verbal or physical towards umpires, game officials, tournament executives or opposing teams will not be tolerated.
6-2
The consumption of alcohol is not permitted in city parks. Observe the law and celebrate at Headquarters.
Violaters will be charged by the police and disqualified from the tournament.
6-3
DO NOT DRINK AND DRIVE
6-4
PROTESTS: All protests must be completed as per SPN rules (STG&OR-#4) and must be accompanied by $150 (one-hundred & fifty dollar) protest fee (cash or money order) at the diamond, at the time of the protest. All protest documentation must be in writing and must be received within forty-five (45) minutes of the end of the game.
PROTEST FEE IS REFUNDED ONLY IF THE PROTEST IS UPHELD.
Protests should include: Team Name, Division, Players Name(s), Diamond and Game Time.
Protests will not be upheld in which the Umpire's judgement is questioned. Only protests based on misinterpretation or misapplication of a rule or player eligibility will be upheld.